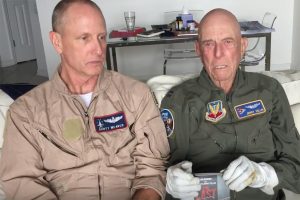 It was July 2017 when my FB (International Officer) on the 777, Jerry Smith, handed me Jerry Yellin’s business card. We were on our way to Buenos Aires. He was telling me the story about commuting from Dallas to Orlando. During the flight, he notices Jerry sitting in a coach seat – but in full WWII regalia including khaki uniform with medals, tie and wheel hat!

As it turns out, Jerry had been traveling from place to place giving talks to veterans about PTSD and his experience flying the P-51 in WWII. He was 93 years old at the time. (Jerry Yellin was an 18-year-old when he started pilot training in Scottsdale). At the time he was flying across country, I believe he was the only surviving cadet at Thunderbird Field (II).

Now that I had Jerry Yellin’s business card, I decided to give him a call. I wanted to interview him. When I finally did call Jerry and requested an interview, he said: “Okay, just as long as you come down to Orlando to meet me in person.” Needless to say, ten days later I was on the 0650 flight from Washington DC to Orlando, where I rented a car and made the 45 minute drive to Champions Gate, just SW of the Orlando airport.

When I knocked on his door, Jerry opened it. He was frail, but in great spirits, with a big smile and white polo shirt on. Little did I know what this day held for me. Here I was at Jerry’s condo, and there was a Japanese film crew inside, filming a documentary about Jerry’s flying career. Indeed, there were two cameras, a boom operator and a female Japanese reporter who was based in NYC. Apparently, Jerry was a big deal in Japan. The filmmakers were from the Japanese version of “60 Minutes” and were filming  the second part of a two-part series.

I wandered between Jerry’s room and the kitchen – watching and listening intently to Jerry’s interview. It occurred to me that at one point, the questions were a bit “pushy,” and maybe even emotional. Afterwards, I told Jerry that it seemed to me they were trying to get him to break down and cry.  Jerry shrugged it off and said that it’s more dramatic if the crew could get him to show emotion.

Jerry and I talked for a while between “takes” in the action. I was enthralled, and I didn’t want to miss a word. In fact, I had purchased an audio recorder before flying down from DC and consequently, I had it running the entire time they were filming.

It seemed to me that Jerry and I developed a bond right away. Perhaps it was a kind of pilot-to-pilot kinship, but Jerry made everyone feel welcomed and at ease. My first impression was just how sharp Jerry’s memory was. He recalled dates, squadrons, instructor pilots and fellow cadets in crisp detail. He was as sharp as a tack!

As the Japanese crew finished up, they wanted to film Jerry driving around his neighborhood. I believe it had something about demonstrating Jerry’s “zest for life” at such an advanced age. But the Florida skies had other ideas, and as it started to rain, the driving cameo was cancelled.

As soon as the filming crew left, Jerry ducked into his bedroom and emerged with a green flight suit on – and a smile from ear-to-ear. Earlier, I had changed into my flight suit when I arrived at Jerry’s condo.

Now it was time for me to set the stage for his official interview with me. Before my trip, I spent some time to research how to conduct an interview with an iPhone and a simple built-in microphone. I set up my iPhone 6S with a tripod and ran the microphone to the side of the couch where Jerry would be sitting. Next to Jerry, on the couch, I placed my F-16 helmet (which I had brought down with me) and both of our books – The Pilots of Thunderbird Field, which I wrote, and The Last Fighter Pilot, which Jerry wrote. As my research had suggested, I placed Jerry one-third of the way within the frame of the camera. This placement was supposed to give the maximum effect. Later, I realized that I had made a very “rookie” mistake. I forgot to look in the background and make it clean. When reviewed the video, you could see vitamin bottles, glasses of water and other paraphernalia. Certainly not an attractive background! But then again, who really who cares? I was there to conduct my first interview with World War II P-51 Fighter Pilot Captain Jerry Yellin.

For more on Jerry and The Pilots of Thunderbird Field, please view my article on Aviation History.