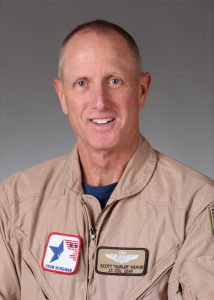 Scott Weaver is a public speaker, author, pilot, aviation historian and retired Lt. Col. USAF. Scott is currently a pilot with American Airlines. He is author of a book called “The Pilots of Thunderbird Field.”

As a speaker. Scott is probably not your “normal” speaker. He is there to inspire. If your company is part of the super-charged world we live in – one that’s highly competitive and constantly changing – then he might be the perfect speaker for your event.

As an author. The Pilots of Thunderbird Field is a story of his family and its three generations of pilots and aviation history from the 1930’s to 2000. The book can be purchased on Amazon.com.

As a pilot for American Airlines.
Scott has flown with American Airlines for over 27 years. Presently, he flies a 777 out of Miami to Tokyo, Hong Kong, Beijing, Milan, Sao Paulo, Paris, London, Buenos Aires, Brazil, Barcelona and other destinations. 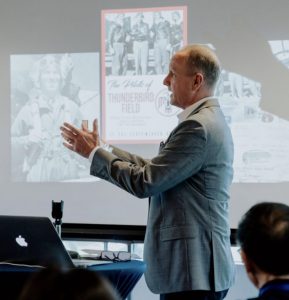 As a senior pilot in the USAF. Scott has over 2,600 hours of instructor and fighter time. While in the Air Force he was also a T38A Instructor at Vance AFB, Oklahoma. Later, he went on to fly as an F16C Fighter pilot at Hahn Air Base, West Germany, as well as the DC ANG at Andrews AFB, MD.

Personal interests. Scott is interested in international baseball, mentorship and supporting youth and club teams in England and Argentina. He enjoys golf, family and an occasional triathlon.